The Academy is based in the historic Theatre of Stradella (“Teatro Sociale di Stradella”), opened in 1846.
About 60 km. from Milan, Stradella is one of the most populous centres of Oltrepò Pavese, a hilly tourist area rich in natural attractions, castles and famous for wine and food.
Stradella was for many decades, one of the main production centres of the accordion in the world. 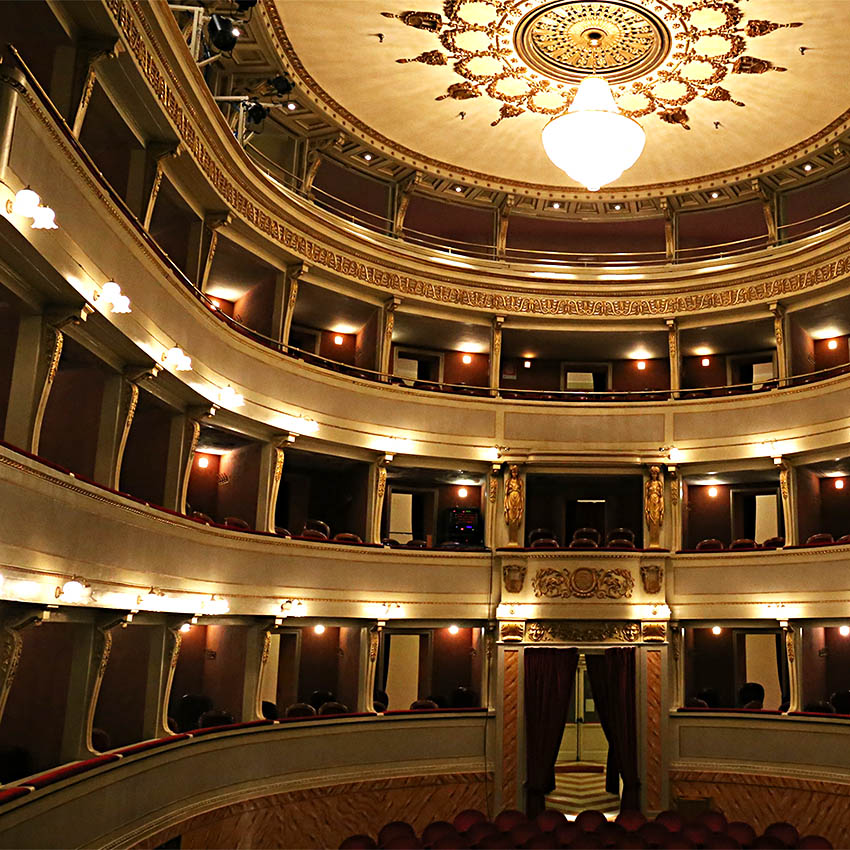 Designed by the architect Giovanbattista Chiappa, the author of important works, both private and public, in Pavia, Lodi and Milan, the building follows the typology of the neoclassical theatre in vogue in the century. The model is acknowledged as the Teatro alla Scala, built in 1778 by Piermarini.
The theatre location occupies the central part of a sober neoclassical building with large plastered façade and string courses. The façade, designed to be seen from the square, is divided in three parts, with the central part slightly recessed and enriched by a balcony in balustrades.
Remarkable is the entry portal with overhanging stone bas-relief with masks and musical instruments alongside a central lyre. The theatre is arranged with entrance hall (from which branch off two winding flights of stairs that lead to the corridors of access to the boxes), the horseshoe-shaped auditorium and the stage on the ground floor, three rows of boxes with balconies of wood and the gallery.
The ceiling is adorned with a large rose window of neoclassical style. The “Ridotto” (Boxes Foyer), home of the Academy, is located at the second row of boxes. These are 44, as many as were originally members of the “Society for the erection of the Theatre”. The currently recovered seats are about 300.
In 1949 the Theatre was declared a national monument as it was considered “a typical example of domestic theatrical architecture of the first half of the Nineteenth century”.

A construction site of the mind

A cultural asset of prestige and also, a space designated to the promotion of the performing activities, the Teatro Sociale di Stradella has the ambition to present itself as a fundamental element of a comprehensive project to develop the historical and cultural heritage of the territory. Not only that, the theatre as a consumer space, more or less traditional, but as a dynamic place, open to the diversity of the arts and cultures of the world. A real “construction site of the mind”.
In this context, We have developed the “Accademia del Ridotto” project.